The Life Chain is an antiabortion vigil held on the first Sunday in October. My first experience with the Life Chain occurred on trip with my husband where we had to pass through Wisconsin Dells. At the time, I didn’t understand it was a nationwide event and wondered why there would be antiabortion protests in a city that lacked an abortion clinic. I don’t believe I even knew the event was also held in my town until antiabortion supporters recycled the Life Chain signage to regularly protest the women’s clinic I was a patient at. For the past three years, I had painstakingly made signage out of black poster board and counter-protested the antiabortion supporters that gather on the bridge every October.

Under normal circumstances I would have shared my experiences counter-protesting and how my mere presence irritated these people like a grain of sand in a plain oyster or a delicate vagina. However, I was unable to make it to this year’s Life Chain due to my physical and mental health. Counter-protesting the Life Chain is already an anxiety inducing event that drains me both physically and mentally and it wouldn’t have been fair to put my already exhausted self through that. I felt guilty doing so, but I decided to put my health over antiabortion supporters that had an ax to grind and a need to feel good about themselves.

The Jackson County chapter of the Wisconsin Right to Life still carried on with their hour long vigil and later posted several pictures from the event. And what a pathetic display it was! Of course, I mostly mean this as a women’s clinic patient and pro-choice supporter that had personally experienced and witnessed some of these individuals with these same signs harassing women outside the BRF Essential Health Clinic for over two years right up until its last day of operation. This display does absolutely nothing to serve the needs of the women and children they so adamantly claim to care about. This display only serves the egos of antiabortion supporters by making them believe they’re saints of human life for standing outside a mere hour when actually they’re flamboyant peacocks patting themselves on the back for doing next to nothing under the guise of actually doing something.

But there’s another reason why this particular Life Chain was pathetic: it didn’t follow the rules.

Instead of one long chain, the pictures show each side of the bridge had a chain. There still would have been enough people to make two chains that would be at least almost a third of a mile long, which would be from the bottom of the bridge to about the Co-Op Credit Union, but neither chain reaches the other side of the bridge!

Rather than being evenly spaced in order to maximize the chain, most stand in pairs or small groups. It does appear some of these people are engaged in conversation or grouped together so they can talk to each other, which would be consistent with Life Chains I have counter-protested. This would go against the principles: “Insist on a true ‘prayer chain,’ free of frivolity, idle chatter, and interaction with motorists.” 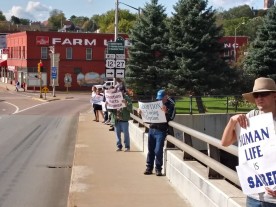 The Life Chain principles also state, “Half of our signs should be Abortion Kills Children—Life Chain’s foremost life-saving message.” One picture shows about 23 signs being held. Granted, the pictures aren’t the best, but those signs are rather distinctive with the bold, royal blue lettering and are easy to spot. I count about three or four of those particular signs in the one picture.

Additionally, “The publicized Life Chain time period is 2:00 – 3:30 p.m. in each time zone, but each Coordinator may adjust the time to meet local needs. Please hold a 90-minute Chain if at all possible.” The Facebook page for the Jackson County Right to Life has been posting a Life Chain event every year since 2015 and all of them have been listed as an hour long. At first I thought it might have been a limitation regarding Facebook Event pages, but found you can set times to half-hour intervals. Also, the event page for the “Unplanned” movie showing is set for 6:30, proving that the group is capable of setting events on half hour marks. What they seem to be incapable of is holding these Life Chains for the 90 minute length time.

It’s one thing for a pro-choice supporter like myself to think that this vigil is terrible, but it’s a whole different matter to be terrible based on the values set by the people that created the vigil. Hopefully my health will be better next year so I can counter-protest the sad spectacle myself.

One thought on “Life Chain: A Sad Display”